How To Mod Your SEIKO

We are the pioneer for the development and production of highest quality SEIKO mod parts. We are always innovating and pushing the limits of dial production. Using only 100% Swiss Super-LumiNova® luminous pigments. ISO 9001 Certified.

Designed By Modders.
For Modders.

Sapphire ranks among the top of the list on Mohs scale when it comes to high resistant to scratching and abrasion. Additionally, given its very wide optical transmission band, these features make sapphire an excellent choice in watch crystal application.

On top of a great material, adding anti-reflective (AR) coating ensures you get the clearest and flawless view of your watch dial. A double sided AR coated sapphire crystal carries a superior clarity compared to single sided AR coating.

Notably, each side are given at least triple layers of AR coating. This resulted in a higher resistance to scratches.

Made exclusively for us with quality assurance by ISO 9001 Certified manufacturers. Crystal fits perfect. Has a nice blue ar color to it. I definitely recommend it!

J
J.
Transforms the SNK809 into a new watch!

I just swapped the Swiss made Lucius Atelier double domed single AR coating crystal onto my SNK809 and I must say this watch has been transformed into a watch that ismuch classier. It has made this watch into something that looks and feels more like a $400 watch. The AR coating is really well done which brings out the dial's details much more vs the stock crystal. It's not gaudy like some other double domed crystals. Finally, I appreciate the single sided AR coating which should dramatically increase longevity of this mod. Well done!

Lucius Atelier got it right with this low dome, clear AR sapphire crystal. The crystal and AR coatings are high quality. Most of the nicer watches that I've seen or owned that have domed crystals are using *low domes. Although the low domes appears subtle from the wearer's perspective while looking down at the watch, a low dome is actually very noticeable from a normal viewer's distance & perspective. It appears classier, is more versatile, and wears much nicer than the exaggerated high domes that have become popular among modders. Even when paired with diver's style dials that have large markers and hands, high domes just appear exaggerated and a bit over the top on the wrist, IMO. A well known online sapphire crystal retailer has been getting rid of their low domes in favor of very high domes of about 2mm or more (even though their specs incorrectly show lower dome heights). I'm glad Lucius Atelier knows what they are doing and have not given in to that trend. I have made two purchases of this item and I hope they continue to carry this low dome crystal with clear AR, as I'm sure I'll be purchasing more in the future.

I wish Lucius Atelier would produce a 29mm version of this crystal with clear AR as well. I would purchase 4-5 right away, as no one seems to be selling this. All the other crystal retailers I've seen are selling 29mm high domes with blue or no AR (again one particularly well known seller lists 29mm low domes when they have actually been replaced by ~2mm domes).

R
R.T.
Using this mod part for: SNKL23K1
Worth the upgrade

Only changing the glass make Seiko SNKL23 look more refined.
This upgrade should be mandatory for every Seiko owner.

Ordered and received the sapphire crystal and brushed pilots bezel. Completely transformed the look of the watch and made it a perfect everyday wear. Lovely handwritten note with J the delivery too, which is a nice touch. Stay classy! 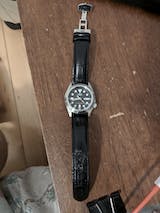 Purchased this double domed sapphire for my SNK mod. Fits great into the SNK fluted bezel. The dome is very very subtle - just what I wanted. Will definitely keep coming back here for my mods! Great products and I love the little personalized thank you notes that come with each purchase!

Bought for my Omega Speedmaster Mark 40. not for the Seiko.
Exactly what I needed. Spending some time for finding proper gasket(0.25mm), Finally super nicely fitted. 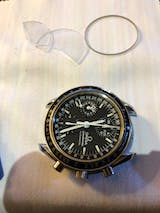 Wow! That is definitely interesting. Did not expect this sapphire to fit an Omega Speedmaster Mark 40. Great job on the research Jaekeun! And, thanks for sharing this info!
W
W.S.
Domed sapphire 30mm

Great quality double domed crystal, not for SNKK tho.. But for watches with 30mm mineral crystal. Nice AR too! For explorer like, go for no AR.